A barbecue fish kebab recipe requires a meaty fish. If flaky then it disintegrates too easy off the skewer and falls through onto the coals so for this recipe I’ve chosen swordfish which is ideal for grilling with skewers. 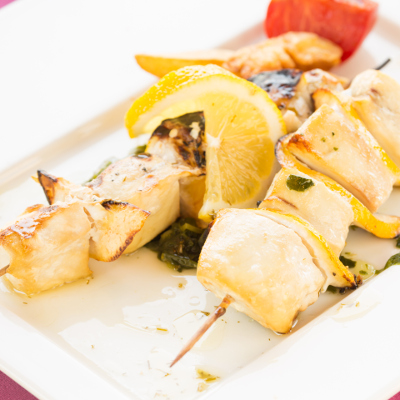 When I first started preparing for this recipe I had a number of failures and all because of the same issue - the fish fell off the skewer. After a number of improvements yet still more failed attempts I finally found the magic combination the keeps the fish on the skewer:-

I’ve used tomatoes with yellow peppers to create a kebab with interesting colour contrasts, you can of course substitute the vegetables depending on what’s in season.

Apologies for stating the obvious but the only allergen in this recipe is fish.

Add the paprika, garlic and lemon juice to the olive oil and stir to create the base marinade. Dice up the swordfish and throw it into the marinade for about 30 minutes giving you enough time to light the barbecue.

After marinating, put the swordfish cubes onto the skewers inter-layered with a tomato, onion wedge or yellow pepper.

Place the kebabs on your grill mat for 5 – 10 minutes over hot coals brushing on the marinade during the cooking process.  Note there is oil in the marinade so liberal brushing will cause unwanted flare ups.

Turn the kebabs at the halfway point (continually turning a barbecue fish kebab is another way to encourage the fish pieces to fall off the skewer).

To serve I like to keep it simple with some salad leaves in a grilled pitta and there you have it!

Note: - Swordfish is regarded as an oily fish so it's a good healthy one to eat. Generally speaking it is a white fish but the color of the flesh can vary according to the diet of the fish.