I picked this BBQ swordfish recipe up whilst in France. My camping guide had let me down big time and when we arrived at our chosen campsite late in the evening we were astonished to see a big sign that read “BBQ interdit”. 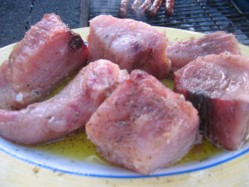 For those of you who don’t speak French it means “BBQ forbidden”. I was really frustrated, turned around and headed for the next camp ground up the road. When I asked at the next site they said “yes – you can even use a charcoal barbecue” so I was delighted but what they didn’t tell me was that I had to use a communal barbecue that was a fair walk from my RV.

I thought that this was going to be a problem but it really turned fortuitous when I was grilling some pork and this French guy turned up with a plate full of swordfish that had been marinated in garlic and olive oil.

We got talking and he explained that it really was that simple, he had bought it fresh that morning and then left it in the refrigerator to let the garlic and olive oil add a simple but effective flavor.

Being on a campground in the height of Summer he could get away with an oil based marinade in the camping refrigerator but doing this at home you may need to be a little more gentle as a more efficient refrigerator could cause the olive oil to cloud and become gelatinous; if this happens the marinade won't "move around" as easily. To that end I've stated in my method statement to marinade at room temperature for the final couple of hours.

They were big thick swordfish steaks so he grilled it for about 20 minutes and of course I got a taste – fantastic!

Cut the swordfish up into cubes of approximately 1½-2" (40-50mm) and place them in a marinade bowl. Add the crushed garlic and the olive oil, cover and refrigerate.

After 4 hours, bring the marinade out of the refrigerator and allow it to sit and come back up to room temperature.

You can either thread your swordfish onto a skewer or just simply grill loose as they are big chunks. Season with salt and pepper prior to placing them on the grill and cook over medium high heat for 20 minutes turning regularly.

Sparingly brush on more of the marinade during the cookout (be careful of flare ups) and when cooked serve immediately.

In this global village of ours we spend little time in conversation with strangers and this just goes to prove that sometimes it pays to show a little community spirit. I know that I’ve learned my lesson and it’s not just how to prepare a great BBQ swordfish recipe!

Return to Home Page from this Easy BBQ Swordfish Recipe