Duck and orange go well together right? So I thought that I’d try a Cointreau marinade the next time my friend Simon came round with a duck or two after a hunting trip.

Cointreau is a branded liqueur with a strong orange flavor, it also goes under the name of Triplice or Triple Sec and if you can get it under either of the latter two names you'll save yourself a chunk of change in the process so keep your eyes open for it in the liquor store. Grand Marnier would also make a suitable alternative but again it's branded and therefore more expensive.

Sugar is a great tenderzer of meat, not only is there added sugar, there's a good deal in the Cointreau too. This marinade recipe really doesn't take too long, once the marinade is prepared all you need is a couple of duck breasts and you're ready to go.

I didn’t have to wait long for the ducks so whilst Simon and my daughter Lucy cut open the ducks to remove the breasts I set about this marinade. 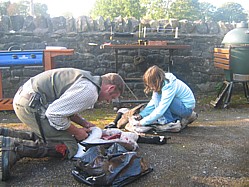 No allergens in this recipe.

Throw everything in a marinade bowl and stir until the sugar has dissolved.

When you’ve zested the orange, slice it up and throw it in the bowl too. Cover and marinade the duck breasts for 30 minutes and that's it.

To cook the duck breasts I went for the smoker and cherry wood.

Before you prepare your smoker, remove the marinade from the refrigerator and hang them to dry for 2-3 hours. (I normally do this in the food chamber of my smoker hence why I don't fire it up straight away).

Smoke at 145°F or 63°C for two hours until the skin has taken on a deep brown coloration.