Eating plancha grilled crayfish my seem like a luxury and you are doing your bit for the environment too.

When my neighbour Simon saw my fire plate plancha for the first time his immediate reaction was “Freshwater crayfish will go fine on there” so sure enough, we went crayfish fishing the next weekend in the River Wharfe and dined on plancha grilled crayfish. 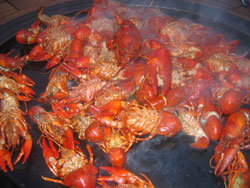 These crayfish are lobster-like American signal crayfish (Pacifastacus leniusculus). They were brought to the UK by fish farmers in the 1970s, they are bigger, stronger and faster-breeding than the indigenous white-clawed variety (Austropotamobius pallipes).

Sadly they are also destroying the white clawed population, by competing for food and they carry a crayfish plague which kills the white clawed variety. In fact they  pose such a threat to native wildlife that they are high on the Environment Agency's list of most wanted foreign species.

Signal crayfish can now be found in abundance in freshwater lakes and rivers across England and Wales and they wreck riverbanks by digging honeycombs of unstable tunnels. So catching, cooking and eating these dudes is doing our bit for the environment!

That said, if you plan to go fishing for signal crayfish it's important to do it in the right place, to use the right size of trap because otters can get caught up in them and get a licence.

Now it's fair to say that there really isn't a plancha grilled crayfish recipe here, it is just a technique for cooking the crayfish using a table top gas grill but then when it comes to cooking crustaceans sometimes less is more.

The first technique is to purge them, this gets rid of any nasties in the gut. With shrimp you would de-vein them before cooking but the shell on a crayfish is too hard.

You basically purge them by starving them of food for a couple of days before cooking. I do this in a bucket with a hose trickling in and foil over the top to stop them escaping, then I change the water every 3 hours so that they don't run out of oxygen.

When if comes to cooking them, frankly there's no humane way to do it, you just have to get on and do it in what I think is the least painful way. Chill the crayfish for a couple of hours in the refrigerator to sedate them and then drop them straight into boiling water.

After 4 minutes we took them out and put them to one side for the party later. 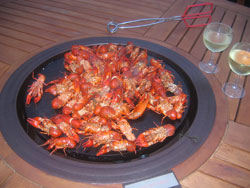 In the evening it seemed like the whole village came round to try crayfish a la plancha! I warmed up the plancha grill until it was nice and hot, drizzled on a little chili oil and then threw on the crayfish – the sizzle got everyone ready for the feast that was upon us.

Before finally allowing my guests to pick their first directly off the plancha I poured on a glass of white wine and watched the steam rise.

I then turned the plancha on low and let everyone pick and choose, served with wedges of lemon and scoop of mayo or more chili oil.

They say that stolen fruit always tastes nicer, well there's something to be said for foraged food too, especially when you've caught it yourself – and it's in the crayfish claw!