This Southern pulled pork barbeque recipe sounds like an extremely strenuous business but it’s not, it’s simply down to a gentle, slow cooking process that makes it ideal for the smoker (although many a good pulled pork has been rustled up in a slow cooker or a traditional oven). 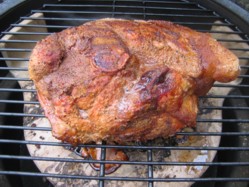 This one is my traditional recipe designed to give you all the flavors of the south where pulled pork is the BBQ staple. Once you've mastered the art of pulled pork using my pulled pork recipes and tips page then this pulled pork barbeque recipe is definitely the next step to add a different flavour dimension.

This Southern pulled pork barbeque recipe calls for a vinegar sauce typical of "the South" and after that all you need is a pork butt and few basic spices and were ready to go. The acid in the vinegar acts like a marinade in that it breaks down the thin layer of connective tissue on the surface of the meat which gives the rub something to stick to and help it penetrate the meat.

You need to allow plenty of time for this pulled pork barbeque cookout. You’ll need about 120 minutes per pound of meat and then a further 60 for standing before it’s ready to shred. That said, don't take the timings as gospel, the absolute rule is that the core temperature of the pork hits 200°F or 95°C before you consider it cooked and ready for pulling and don't try to force it to this temperature. It has to be low and slow with plenty of patience otherwise you'll end up with chewy strands that take a lot of pulling.

Pulled pork is so called because of the way that it is served up. As it says, it’s literally been pulled apart. Nowadays it can be served chopped or shredded (although traditionalist would probably shun this) but one thing remains true and that is the final presentation – in a bun with barbecue sauce and a coleslaw side.

For the vinegar sauce

If your butcher hasn't already done it, remove the skin from your pork butt and trim away the majority of the fat. You can leave a small amount of fat on but not too much because you want the sauce and rub to penetrate the meat - the fat only acts as a barrier.

Now it's time to mix up all the ingredients for your vinegar barbecue sauce, just pop them all into a large jar or bottle and give it a good shake.

Use the ingredients listed with the pork butt to make the rub and stir to ensure that you have it well mixed.

Baste the pork in vinegar sauce and then rub in all of the rub leaving some of the vinegar sauce for later basting. Leave the rub to work its way into the meat for a hour or so before cooking.

Give the pork 2 hours in the smoker at 225°F or 110°C and then brush or spray over a little of the remaining vinegar sauce. Repeat this on the hour for the next three or four hours.

Check the temperature of your meat, wrap it in foil with a pool of the vinegar sauce in the foil and return it to the smoker or you can place it on a baking tray in your kitchen oven. Allow the meat to cook in the foil until the internal temperature reaches 200°F or 95°C then remove the pork and leave to sit for 60 minutes still covered in the foil. Ensure that you capture any juices that are in the foil - see my pulled pork recipes and tips page to see how to use these juices.

After the hour, go to it with a couple of forks or a set of bear paws, pop it in a white bun and serve with your favorite barbecue sauce and coleslaw side.

Note:- Having cooked the pork butt for more than five hours in the smoker, the passing of more smoke over it will have a negligible effect on flavor so wrapping it in foil makes no difference taste-wise.

Where the foil does help is in helping the meat overcome the plateau or stall - that time when the temperature just seems to falter forever and a day around 160°F or 70°C. Wrapping it in foil stops moisture evaporation (which cools the meat down) so helping it increase the internal meat temperature and reach 200°F or 95°C.

Return to Home Page from this Pulled Pork Barbeque Recipe