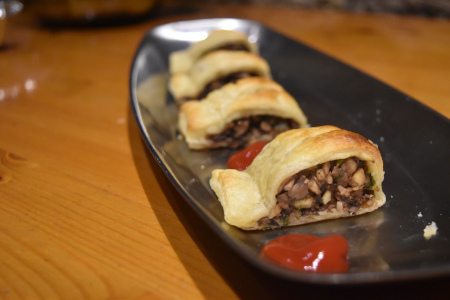 Infact one of my party guests loved them so much that she asked what was in them. I started out by saying that the base ingredient was mushroom and she replied "Oh, I don't like mushroom!

By making the stuffing myself, I've got full control not only of the flavour but also the amount of moisture in the mix.

My other big learning curve was learning how to bake pastry without burning it. I started out simply using a standard baking tray and cooking indirectly on my kamado grill at 200°C and the result was a succulent filling but with burnt pastry.

The set up was right but the equipment was wrong. Take the mini sausage rolls off the baking tray and onto the pizza stone and we're really starting to rock!

So to confirm the set up, just set your grill up for indirect cooking at 200°C, place your vegan mini sausage rolls on the pizza stone and bake for about 20 minutes.

Here are the full recipe details and note that preparation of the filling needs to be made in advance.

The first job is to prepare the filling which I have done in the frying pan over direct heat. Alternatively you could use the wok and wok stand.

Heat 1 tablespoon of olive oil in your pan / wok and add the chopped veg. Cook for 10 to 15 minutes, or until golden.

Meanwhile, finely chop the mushrooms. I take the stalks out first because that makes the mushrooms easier to chop and then I chop the stalks separately. Peel and crush in the garlic, then add the chopped mushrooms and garlic to the pan. 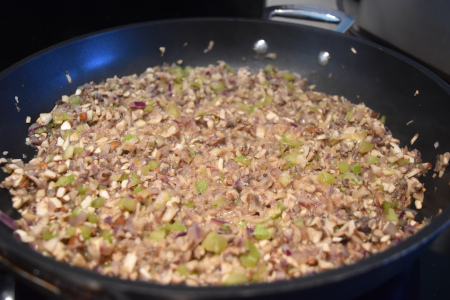 Cook for a further 5 minutes, or until the mushrooms start to soften.

Next add the mustard, wine and soy sauce, season with salt and pepper, cook for 5 to 10 minutes, or until all the liquid has boiled and bubbled away. Set aside to cool.

Turn out the cooled mushroom mixture into a large mixing bowl and add the breadcrumbs. Finely chop and add the parsley leaves and thyme leaves.

Stir well to combine everything together and adjust seasoning to taste.

Now set up your barbecue for indirect cooking at 200°C (395°F). For my Monolith kamado this means having the heat deflector stones in situ.

Cut the sheets of puff pastry in half lengthways so you have four equal-sized pieces. 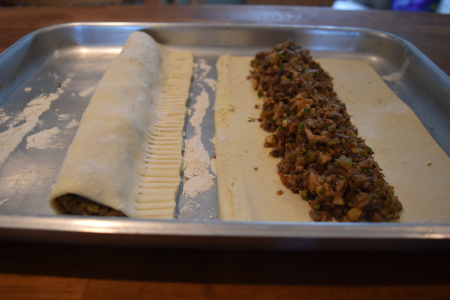 Spoon a quarter of the mushroom mixture along the middle of one length of pastry, moulding it into a long sausage shape with the back of a spoon.

Brush the almond milk along the pastry edges, then carefully fold one of the long sides of the pastry up over the filling.

Press the edges to seal, then crimp with a fork. Repeat with the remaining ingredients until you have four long rolls, then cut each length to create your vegan mini sausage rolls.

Place the mini rolls closely together on the pizza stone (this helps keep the ends moist), brush with the almond milk and sprinkle over the sesame seeds.

Place the pizza stone on the 2nd tier grill grate so that you have a good gap between the pizza stone and the heat deflector stones and bake for 20 minutes until the pastry is crisp and golden.

I served my vegan mini sausage rolls very simply with a dollop of homemade tomato ketchup.