For my smoked bacon wrapped fish recipe I'm using gurnard tails, a real meaty white fish that's well worth trying and produces tasty bacon wrapped gujons. If you can't get it, you could substitute monkfish tails although you'll pay at least double the price for the privilege! 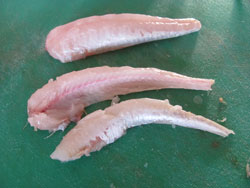 Gurnard is such an underrated fish and so inexpensive to buy. I have to say that it looks pretty ugly on the fish counter so I can understand why folks don't buy it but when your fishmonger has skinned it for you, you'll be left with a lovely firm tail of fish that really does look like a small monkfish.

Try to get the bigger fish because when cooking you're trying to get the bacon to crisp without overcooking the fish. A hot grill will help but if you only have little tiddlers, your fish will be cooked and start to dry out before the bacon has crisped up.On the same note, thin streaky bacon will crisp up faster than thick so get your butcher to slice the bacon thinly.

The tail has a bone down the center and in my recipe were going to use the half tails so you might as well get your fishmonger to cut this bone out too. My fishmonger only had five gurnard left which weighed in at just over a pound (500g) and by the time he'd finished skinning and boning there was enough for a generous portion for two totalling about just over the ½ pound (300g) so I've bulked up the ingredients to give enough goujons to suit 4 people.

Just one last thing. Preparation time is less than it takes to get the grill up to temperature!

Bacon is a processed meat so read the details on the pack, that is unless you make your own bacon.

Bacon wrapped fish is all about fresh flavors and keep it simple, you shouldn't need to add extra salt because there's plenty in the bacon. Lightly sprinkle the fish with pepper and then spiral a rasher of bacon around each fish tail. 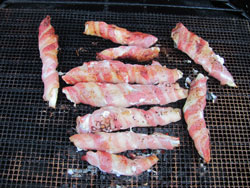 Make sure your grill is hot and go for about 7 minutes on each side until the bacon is lightly crispy. Serve immediately, I did mine with a pasta salad.