Rub on this very simple spice mix and immediately you’ve got Chinese BBQ chicken wings to die for. 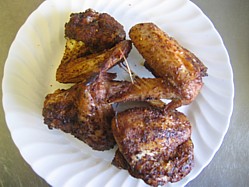 Many of us will only cook with breast and I think this is such a shame because the legs and the wings have so much more flavor and succulence. I once visited a meat packing warehouse down in New Orleans and was shocked to find them packing wings for export...."there's just no demand" I was told.

Well maybe with this recipe I can help change your mind?

The spice mix for these Chinese BBQ chicken wings is really easy to make up and once you've rubbed it onto the chicken you can grill immediately so no need to hang about, get that grill fired up and let’s get cooking.

Note:- It's only chicken wings where I recommend you add a rub to the skin. If you're cooking any other joint of chicken with a rub then I would always take the skin off otherwise the flavour of the rub won't penetrate the surface of the meat so you end up with a well seasoned skin and bland meat beneath. It's fine with a chicken wing because the ratio of skin surface area to volume of meat means that pretty much every bite off the bone is going to be a mix of meat and seasoned skin.

The recipe calls for hoisin sauce which essentially is a Chinese barbecue style sauce. If you click the link in the ingredients list then this will take you through to my own recipe to make hoisin sauce but the alternative is to buy ready made in a jar.

Whether homemade or ready made hoisin sauce contains a number of allergens although please read the label on your jar of hoisin if buying ready made. My homemade version contains:

There are no other allergens in this recipe.

Take a look at the chicken wings and you'll see that the wing is in three joints:

I usually cut the wing tip off (at the carpal joint) with a sharp knife and put it to one side for stock because frankly there's very little meat on it and I find that they get caught up in my cooking grate making the wings difficult to turn.

Just having the two meaty joints makes them easier to cook because the two joints lie flat on the grill so you can get even cooking all over whereas the three jointed wing doesn't naturally lie flat.

The two jointed wing is easier to eat for the same reason.

So once you've trimmed the hand (wing tip) off it's simply a matter of mixing up the 3 spices and rubbing them all over the chicken. Grill the chicken wings for 15 minutes turning occasionally.

I'm not going to add the hoisin to my bbq chicken wings until they are off the grill because I don't want the sauce to burn. When you're in the final five minutes of cooking, spoon out your hoi sin sauce into a ramekin and place it on the grill to warm through. Place the ramekin on the table and let your guests serve themselves.

When cooked, remove your Chinese bbq chicken wings from the grill and transfer to a serving bowl. Drizzle with a little sesame oil and throw the strips of spring onion over the top.