It's important to be clear that this homemade chorizo sausage recipe is for the Spanish chorizo rather than the Mexican version. 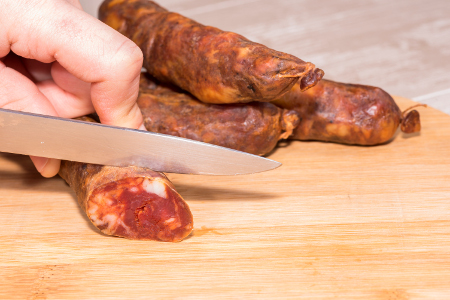 While they share the same name these two chorizo sausage recipes are fundamentally different and need to be prepared in different ways too.

The Difference Between Spanish and Mexican Chorizo

Here are some of the recipes where I've used Spanish chorizo

This Is A "Spanish Style" Chorizo Sausage Recipe

True Spanish chorizo is dry cured and fermented in carefully controlled temperature and humidity. Traditionally this would have been done in mountain caves but we don't all have a mountain next door to us.

I've called this a Spanish style chorizo sausage recipe because it's going to be a semi-dry cured sausage with the tangy fermented taste coming from what sausage makers call "Fermento".

You will need to prepare approximately 2m (7 feet) of small diameter hog casing. Read my section on making homemade sausage to see how this is done.

Alternatively do the full weight in pork shoulder as this will have pretty much the right ratio of meat to fat.

Dice up the meat and fat into cubes and grind using an 5mm plate or smaller, place the ground meat in a mixing bowl and return to the refrigerator.

Mix the dry seasoning ingredients together and then add the water and corn syrup to make a paste and place this in the refrigerator for 30 minutes.

When everything is well chilled, mix the ground meat and seasoning together and knead the mix for a good 5 minutes to ensure that the seasoning is well dispersed.

Pack the sausage meat into your stuffer barrel, full your hog casings and make 12" links (approx). Tie the links together with twine to make a "horseshoe". Take one link and record the weight and use a market pen to colour the twine so you can identify which sausage you weighed at the end of the smoking.

When finished, place your sausages in the refrigerator on a bed of paper towel and allow the seasonings to be fully absorbed by the meat overnight.

The next day, set up your smoker with no smoke and a small amount of heat (about 60°C or 140°F), hang your sausage horseshoes and dry them until skin is dry to the touch. Next cold smoke for about 2 hours with the vents fully open and at the lowest possible temperature - you're looking to achieve between 15% - 25% weight loss and keeping the air flowing as much as possible will help. 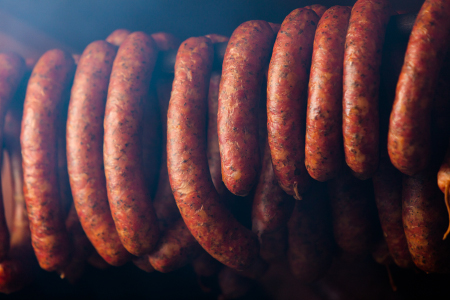 Take a third hour to slowly raise your smoker temperature to between 77°C - 79°C (170°F - 175°F) and continue cooking (and smoking if you wish) until the core temperature of the thickest link reaches 71°C (160°F). When done, take out the link that you marked with the pen and check for weight reduction. If you have achieved a weight loss of between 15% - 25% then you can stop smoking, if not, continue cooking and checking for weight loss every hour until you reach the desired weight loss.

When you have achieved the desired weight loss take the sausage links out of the smoker and hand them out to dry in a cool ventilated area for an hour or so before returning them to the refrigerator. Your chorizo is now ready to eat, you can either slice it and eat it as is, use it to the recipes that I've listed above or simply add it to any stew for a different flavour dimension.