This has to be the best grilled pork chop marinade because you can have it done in a flash, the only thing that you need time for is the brine to work it's magic. I left my pork chops in for one hour and the results were awesome. 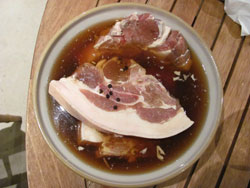 Technically this marinade is actually a medium strength brine because it contains salt rather than acid and that means that it works in a different way. What does that mean for you?...Not a lot other a brine adds moisture to meat rather than tenderness.

It's really easy to overcook pork and end up with a dry offering so that's why I like to use this brine ad to that the sweetness from the sugar and a chilli kick, what's not to like?

A brine will penetrate further into the meat by acting to denature the protein sheaths in the muscle and when this happens moisture flows into the flesh so making the meat more juicy and carrying the flavour of the brine. Marinades only work on the surface of the meat by breaking down the outer (chewy) collagen layer giving meat the sensation of being more tender. Any flavour imparted by a marinade takes effect solely on the outside of the meat.

Read more about brines and how they work.

After the brine stage all I did was grill the pork chops in my kamado barbecue for 15 minutes and that was it...fantastic pork chops!

Place all the ingredients in a saucepan and bring them to a boil to ensure that the salt and sugar has dissolved, then allow to cool.

Place your pork steaks or chops in a shallow marinade bowl and (once cool) pour the brine marinade over the meat. The marinade time is only an hour so there's no need to refrigerate.

Depending on the thickness of your meat, grill for 5 – 10 minutes on each side over medium hot coals.The best way to be absolutely sure that your pork is cooked through is to use an instant read temperature probe and look for:-

When you reach the desired core temperature, remove the chops from the grill and allow them to rest for 5 minutes prior to serving. I served mine with a new potato salad.