A BBQ Thermometer & Temperature Probe Is Essential For Every Outdoor Chef

Using a BBQ thermometer or temperature probe is the easiest way to check that your meat has been cooked to your liking and it's also essential to establish safe internal meat temperatures so that you don't poison yourself or your guests.

Let's also be clear, the most extreme form of food poisoning ends in death. This is not an exaggeration, this is a serious matter.

Most of us are aware that:

As barbecue enthusiasts we need to take extra care (physically) because of the types of food we cook:

And also thermally because of how we cook it:

Note: Whilst what I've written above might seem a little scary, with good hygiene, safe food handling and proper cooking, barbecue, smoking & grilling does not give rise to any more risk than other forms of cooking.

Bugs And Killing Them

You can kill different bugs in meat and fish in different ways such as freezing, curing (with the use of nitrites) and cooking. For more on nitrites see my section on curing meats, this part of my site is dedicated to killing bugs by cooking and so covers the following:

The Bugs We Want To Avoid

How To Prevent Food Poisoning

Trichnosis is a parasitic disease most often associated with eating under-cooked pork but it must also be noted that trichinae larvae my be present in any warm blooded omnivorous animal such as bears.

There is no danger if pork is cooked to a minimum internal temperature of 58.4°C (137°F) throughout. To be even safer, use my safe temps chart.

Freshwater fish can contain parasites that are harmful to humans. The same is true of salt water fish to a lesser extent and this includes farmed fish.

There are two ways to kill the parasites:

Most domestic freezers will not run at such low temperatures so if cold smoking salmon then it's best to use commercially frozen fish.

This is a disease of rodents and therefore relevant to rabbit and hare. Most human infection is caused by handling the raw meat so the best prevention is to use rubber gloves whilst butchering.

Symptoms include fever, chills, headaches and vomiting. Tularemia is not fatal and can be treated with anti-biotics.

After rabbit is cooked as per pork (see our chart) then it is safe to eat.

Salmonella is the most common cause of food poisoning and thankfully is rarely fatal. Foodstuffs most commonly associated with salmonella include poultry and eggs.

Symptoms include intestinal cramps and diarrhoea and anti-biotics provide a most effective cure.

If the safe cooking temperatures below are followed and food is kept hot then the risk of salmonella poisoning is small. More likely causes include cross contamination of raw and cooked meats.

Botulism can be fatal and therefore must be taken seriously by the smoker enthusiast. The word botulism is derived from the Latin word botulus which means "sausage". Need I say more?

A properly cooked sausage is not a problem, most cases of botulism occur through improperly processed meat. Nitrites are the chemicals to use to prevent botulism in processed meats and for more on this subject read my section on curing meats.

I put this one in a similar category to salmonella in terms of how to avoid it but infection is certainly more serious because it can result in death.

Proper cooking (to the safe temps chart) is the best prevention and ensure good hygiene practices to avoid cross contamination of raw and cooked meats.

How To Prevent Food Poisoning

Having mentioned good hygiene practices, a lot of us are still exposing ourselves to unnecessary risk by not using a BBQ thermometer.

I used to be the sort of guy who would work on the old adage "prick the chicken and if the juices run clear then it's safe to eat... a bbq thermometer is the sign of someone who doesn't know what they are doing."

Well I've changed my mind, a bbq thermometer is the single piece of kit that every outdoor chef must have and the two common myths below give good reason why:-

Not true. For sure red meat does turn brown when cooked but that's not the only reason meat turns brown, it also turns brown when aged. Freshly killed flesh is red because the blood (haemoglobin) is oxygenated but as meat is aged, the level of oxygen decreases and the blood turns a blue / brown so changing the colour of the meat.

Cutting into meat and checking the colour is not a reliable way of determining whether meat is safe to eat. You can't argue with the readout of a calibrated BBQ thermometer.

Myth #2 - "Chicken is done when the juices run clear"

No longer true. We consume so much chicken these days, it is intensively reared and it saddens me to say that in many cases these birds are fattened up before their bone structures are properly formed. Some of these chickens never walk in their short life-time.

For the same reason, when cooking, blood can seep out of the poorly formed bones and taint the meat. Your chicken could be perfectly cooked despite there still being traces of blood so if you're not using a BBQ thermometer you could be completely over-cooking your bird.

Use a free range bird however and your chicken should have well calcified bones.

What Type Of BBQ Thermometer Do You Need?

When considering what type of probe to buy there are essentially three steps in the good, better, best styles of BBQ thermometer.

First thing to point out is that for measuring meat temperature an instant read thermometer is absolutely essential and a digital one at that. Thankfully the old days of mechanical thermometers or mercury thermometers has been surpassed, you can still get them, they're cheap but really not sufficiently versatile for barbecuing.

*The only exception that I've found to this is the JensenGrill which has its thermometer calibrated to take account of the distance between the cooking grate and the position of the thermometer.

Having concluded that a digital readout is the way to go you can next break the designs of BBQ thermometer down into two types:-

The probes are best suited when you need an immediate reading and have easy access to your food:

The best instant read BBQ thermometer is the Thermapen

I wouldn't be without my Thermapen, if I had to choose just one piece of barbecue equipment (after my barbecue) then this would be it.

I don't just use it for barbecue either, it pretty much goes wherever I go to cook. 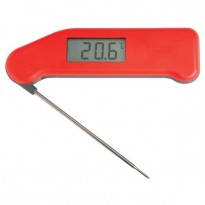 There are cheaper thermometers on the market, I've tried them and frankly they don't come up to the mark. This picture compares the (blue) Thermapen to a cheaper (yellow) Hygiplas probe and frankly the difference is like chalk and cheese. 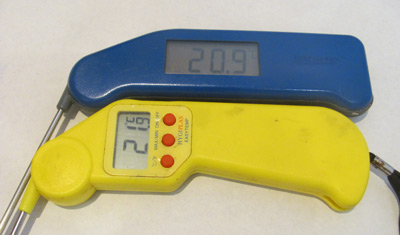 Look at the picture carefully and you will note that the digital readouts are not the same. Upon calibration I proved that the Thermapen is the more accurate reading.

The display readout on the Hygiplas is in the wrong aspect. Any right handed person has to tilt their head to the left to read the output and to a left handed person the readout will be upside down.

Even the basic Thermapen without the directional readout is easy for a left handed chef to read.

Moreover, take a closer look at the tip of the probe: 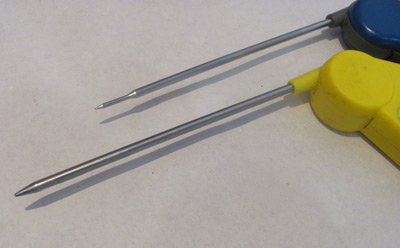 The blue Thermapen has a finer point to the probe

The blue Thermapen has a much finer tip allowing it to penetrate skins (such as on fish) and delicate flesh so much easier. When I tried using the yellow Hygiplas I couldn't readily penetrate the fish skin and just squished the skin down onto the flesh.

For food safety this is priority No1 and the Thermapen is the best on the market.

Note: When you've used your probe to check the temperature always use a probe wipe. Probe your meat and it is under-cooked, then next time you probe it is cooked, if you haven't sanitised your probe with a probe wipe between tests then you may have cross contaminated your cooked meat with any bugs that may have still been present in the earlier under-cooked test.

When it comes to smoking you need to be able to monitor the temperature of your meat remotely because you don't want to be opening the hood on your smoker every 30 minutes and losing all the heat in the food chamber.

This is where the remote BBQ thermometer adds value.

The display read out is provided by a separate unit which will be connected by a wire or (in the top of the range models) wireless.

These BBQ thermometers allow you to continuously monitor the meat temperature and some also have an alarm that will sound when your meat reaches the desired temperature so that you don't overdo it.

Whether you need to have a wireless thermometer is down to the design of your smoker ie. how the smoker hood closes with wires coming out or simply how much you want the state of the art.

The wireless remote unit will allow you to be up to 100 feet or so away from the your smoker so when preparing your cookout you’re not necessarily tied to standing by the barbecue smoker say if the weather's bad or like me, you smoke all year round.

I've tested a number of remote BBQ thermometers and the one that consistently comes out on top is the Maverick ET732. It's a robust accurate device and is great value for money. 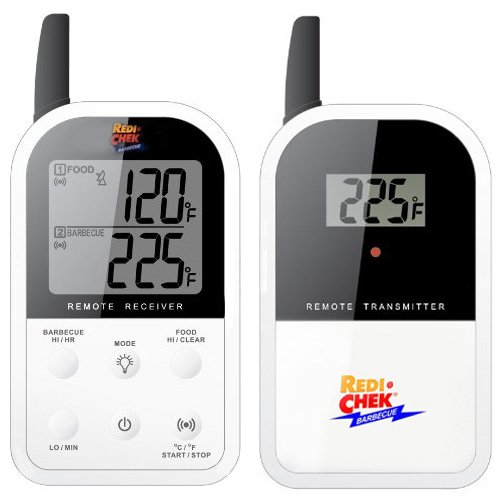 The Maverick ET732 is my best value remote BBQ thermometer

If I have one niggle it's that the instructions are poor but who reads instructions these days? Five minutes playing around with it and you'll get to grips with it.

The final option is to have a BBQ thermometer with more than one probe, this will allow you to check more than one point in the meat without having to move the probe manually (something that would again require opening the smoker hood). This can be a particular advantage when cooking a large bird like a turkey because you can insert one probe in the breast and one in the thigh and keep a check one both temperatures at the same time.

It pays to calibrate your temperature probe on a regular basis to check that it is giving an accurate readout and there's a very easy way to do this:

As a double check, if you have more than on probe, test them simultaneously. If they both read the same then the chances are they are accurate no matter at what temperature you choose to test.

You can check that your food is cooked and safe to eat when you achieve the following internal meat temperatures:-

Seafood is a little less definitive, I don't use a BBQ thermometer for these, it's best just described in the following way:-

Finfish - Cook until opaque and it flakes easily with a fork OR if the skin comes away easily from a fillet, it's cooked.
Shrimp, Lobster & Crab - Shells turn red and the flesh is white opaque
Scallops - Turn milky white and become slightly more firm
Clams & Mussels - Cook until the shells open, discard any that don't open

For those that do want to know it all, the signs and symptoms of food poisoning range from tummy ache, diarrhoea, vomiting, abdominal cramps, and in more severe cases, fever, dehydration and even death, but having said all this, please don’t be put off having another barbecue. Take the right precautions, use the table above to monitor safe internal meat temperatures, follow my 4 basic food hygiene recommendations and barbecue food poisoning will be a thing of the past.