I'd describe this smoked pork tenderloin recipe as Chinese style because we're gonna heavily spice the rub with Chinese five spice and finish off with a soy sauce and chili glaze. 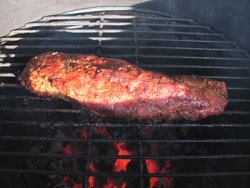 It's a two stage cooking process with indirect cooking for the first hour and then a quick flash on the grill to caramelise the soy sauce based mop. The piccie above shows the smoked pork tenderloin after the smoking phase and now grilling nicely.

Sometimes referred to as pork fillet, the tenderloin is a really lean cut of meat that is cut adjacent to the spinal cord of the pig. It's effectively the pork equivalent to fillet steak (filet mignon) and should be beautifully tender (as it's name suggests).

Pork has to be cooked through to be safe to eat. Some chefs believe that it is acceptable to serve pork pink but I prefer to see mine past this stage but because there's little fat on tenderloin, the challenge is to keep it moist and safe to eat at the same time.

The two stage process in my Chinese smoked pork tenderloin recipe achieves this perfectly. The low and slow first hour ensures that the tenderloin is cooked through and the final grilling stage adds flavour.

Place all the ingredients for the rub (Chinese five spice, chili powder, salt and pepper) in a jam jar, put the lid on and give it a good shake. Pour the mix over the pork tenderloin and rub it all over. Set the tenderloin to one side for an hour so that the rub can really penetrate the meat.

For one hour there's no need to refrigerate your meat, in fact, if the tenderloin came straight out of the refrigerator before the rub was applied then this hour will serve it well to get it up to room temperature before cooking.

Set your smoker up for indirect cooking with a water bath underneath the cooking grate and cook for 1 hour at 225°F or 110°C.

Whilst your meat is smoking, take a small saucepan, throw in the ingredients for the mop and bring it to the boil and stir to ensure that all the sugar has dissolved. As soon as it has boiled, take it off the heat, put to one side and allow to cool.

When your hour is up on the smoker use a thermometer to check the core temperature, the ideal range for this stage of the cooking is to be at 65°C or 150°F. When you've hit this temperature you can remove the tenderloin from the smoker, re-set for direct cooking and get some air in to crank up your grill to a high setting.

Flash grill the tenderloin for 5 minutes on each side and baste with the mop. When done, remove from the heat and allow to rest for 15 minutes.

To serve, I like to slice thickly and drizzle over the remains of the mop.

Note:- You can safely drizzle the remains of the mop over the slices of pork because you brush it onto meat that has already been cooked in the indirect stage of the recipe so there's no chance of cross contamination. Had the mop been brushed onto raw meat then you would have to separate some mop prior to brushing it onto the meat otherwise the raw meat would contaminate the saucepan.