All American barbecue recipes, the very best in low and slow BBQ cooking all in one place! 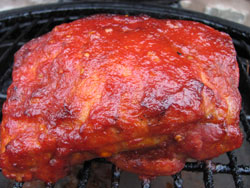 Big hunks of meat cooked indirectly and slowly with patience, care and attention at low temperatures. All over the States the process remains a constant but the ingredients vary from State to State and in many places the recipes remain closely guarded secrets.

So whether you're American looking to hone your skills or from another part of the world looking to understand what all the fuss is about then the low and slow BBQ recipes below will set you on your way to a better understanding.

Pulled Pork Recipes and Tips - The place to start

Easy Pulled Pork - Get the right cut of pork and you won't be disappointed.

Smoked Pulled Pork - No rub on this one, just a tangy mop & BBQ sauce.

All the best smoked brisket recipes on one page.

The Complete Guide To BBQ Ribs

OK so not really low and slow BBQ but I can't cover all American barbecue recipes with mentioning the good ole hamburger.

This link will take you to all my hamburger recipes together with my ultimate guide for making the best patties.

All the recipes below take you right through the process for making your sausage from scratch, how to cook it and the traditional ways of serving.

Bratwurst (Wisconsin) Sausage - the staple of every sports stadium in the country.

Wienies In BBQ Sauce - A traditional take on the Vienna sausage perfect for the hot dog.

Creole Chaurice Sausage - Straight from the deep South and it's got a chilli kick to it!

This whole section of my website is dedicated to helping you find the best recipes and BBQ menu ideas country by country, culture by culture so you can pull together for one big themed cookout. So if America isn't where you want to be then there's plenty more to choose from.

It was further popularized with the advent of the charcoal briquette and it's move into mass production by Henry Ford. It's hard to identify what, when or who developed into the staple that it is today but when you sink your teeth into moist juicy ribs smothered in sweet barbecue sauce it's not difficult to understand why.

Return to Recipes Home from All American Barbecue Recipes