The charcoal or gas barbecue grill debate now has to be expanded to include electric pellet grills because this letter style of grill is becoming increasingly popular. That said I think you can still funnel the debate down into three key factors:

In this article I hope to address all three in a balanced way but at the end of the day, the enjoyment factor surely has to come down to personal preference.

Which barbecue grill delivers the best flavour? Is it charcoal or gas or the electric wood pellet grill?

To be honest, the jury of "experts" is out on this one. Many folks believe that the smoke from the charcoal adds to the flavour of the food but the official word in this is that it’s not true.

The smoke that adds the flavour is that created by the fat dripping onto the coals and then being burned off. Since that fat is the same whether cooking over charcoal embers, gas flame tamers (or lava rocks) or the baffle plate of an electric pellet grill then the argument goes that the flavour must be the same.

My own view is that the bi-products of burning gas are heat, light, carbon dioxide and water and bi-products of burning charcoal or wood are exactly the same + smoke so if my theory is correct then both charcoal and wood pellets must have some influence on the influence the flavour. Whether that subtle difference in flavour is actually better of course is another matter.

Certainly my belief is that charcoal adds the most flavour, followed by wood pellets and gas bringing up the rear. It must be noted however that the higher temperature you cook at on a pellet grill, the more complete combustion is and so the smaller the flavour impact.

The same logic also has to be applied to the further addition of wood chips or pellets when smoking. If the smoke generated by wood chips didn’t add any flavour, why do it?

Note:- Adding flavour by smoke is going to have greater effect the longer the cook so it's fair to say that if you are searing a steak (hot and fast) then the flavour differential between gas or charcoal is going to be negligible.

Anyway, if we move away from the flavour debate there are two fundamental differences when considering on charcoal or gas and that's the preparation time and clean up time.

Charcoal takes longer to get up to temperature. You’ve also got to give it time to settle into a grey ash and heat rather than the initial period of black coals and flames. So patience is required but if you’re like me it’s all part of the cooking experience. 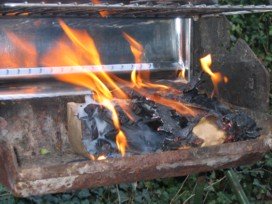 Gas is much more instant, literally flick a switch as you’re off. Well, not quite...

Different gas grill manufacturers use differing techniques to stop flare ups and also provide the hot surface from which the dripping meat juices can vapourise. The well established way (but now less popular) is to use lava rocks and the other is to use what I call a flame tamer (Weber call it a flavourizer bar) - an angled metal shield which sits above the burner. The key words here are "hot surface", in other words, even when using gas it's important to fire up the burners and let everything warm up before cooking.

This heat up time for gas is approximately 10 minutes which is still way shorter than the 45 minutes that you'll probably need for charcoal.

That said, the 45 minutes I quote above for charcoal relates to an open grill, there are charcoal grills out there that don't rely on all the charcoal being alight before cooking and control thermal capability using airflow.

The best example of this is the ceramic kamado. Most kamado manufacturers claim that a kamado is ready to cook on in 10 minutes. I bought one to check this out and I’d argue that it’s better to leave it another 5 minutes but in principle it makes for an almost instant switch on charcoal BBQ.It's fair to say that I've become a bit of a kamado fanatic!

So a kamado takes the timing issue away from the charcoal or gas debate but there's still the mess and not least the expense of buying a ceramic barbecue in the first place. 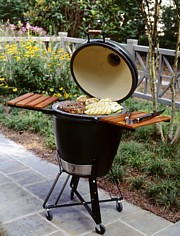 Gas barbecues are technically more developed than charcoal units and this means that clean up is more important to protect it’s capability for future use.

For sure charcoal is more dirty but it’s a very simple process that’s been used for thousands of years and for this reason there’s “nothing to go wrong”. Just let the charcoal burn out and scrape any charred food remains off the grill grates and there's not much more to do.

I’m not trying to say that a gas BBQ is like a computer but it's important to ensure that the flame tamers and burner nozzles are clean and free from debris. Small factors like this make the difference between when it comes to the tidy up at the end of a cookout – something that I hate - but many manufacturers are looking closer at this point and making removal of flame tamers and burners from the grill much easier.

Of course I'm now going to throw the kamado spanner in the works. At the end of a kamado cookout, open the top and bottom vents and the heat will crank up and particulate any debris leftover inside the kamado. It doesn't get rid of everything but it does meant that a brush down with a wire grill brush is all that's needed to finish of.

I split this two ways.

Firstly there are those who like cooking outdoors, entertaining and socializing. They are looking to repeat the indoor cooking process outside.

Secondly there are those that like playing with fire, they enjoy the fun of cooking over traditional fuels and the whole experience that goes with it.

If the flavour debate or the practical aspects haven't led you to conclude whether you would prefer a charcoal or gas grill then maybe this last point will swing it?

You see I fall into this second category so for me there is no charcoal or gas debate... it's charcoal every time.

Of course when it comes to smokers you've then got to throw wood into the mix but lets not start that one today!