The Traeger Timberline 850 returns Traeger to the forefront of the wood pellet grill market. Build quality is better than the other Traegers, the phone app is an improvement but there are alternatives that could either save you money or deliver more performance.

★★★☆☆ - This electric pellet grill stands out in terms of its robust quality of construction and ease of use I but when stepping up to this sort of money I still feel that it only does half the job. 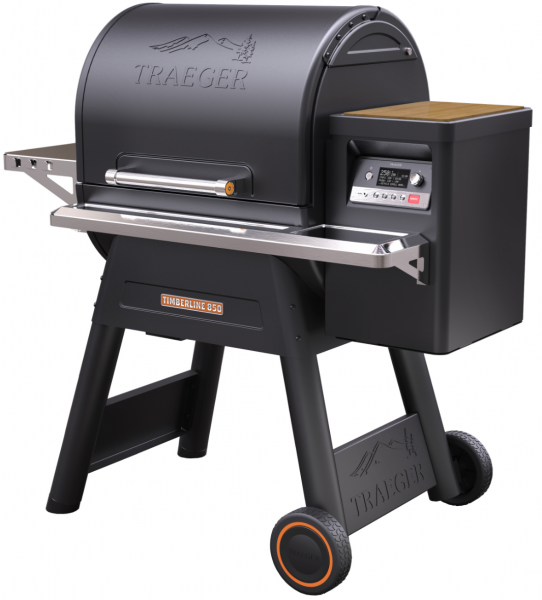 If you think of an electric pellet grill then the name Traeger won't be too far away from the forefront of your mind. Pioneers of this type of outdoor cooking Traeger have set the benchmark for many years but have in recent times come under pressure from more and more competitors. In the past few years the (more expensive) Grillson really took pellet grilling to a new level and the Traeger Timberline 850 does an excellent job in somewhat redressing that balance

2014 saw Traeger taken over but new owners and it's fair to say that the resulting products have raised the bar especially in terms of manufacturing quality standards.

To call the Traeger Timberline 850 (or any other Traeger for that matter) a grill is really a misnomer because these pellet grills cook indirectly. They are more like an oven than a grill.

The fuel used is a hard wood pellet stored in a hopper to the side of the Traeger. An auger (screw thread) feeds the wood pellets into a central fire pot in the bottom of the food chamber which is ignited by a heat rod. This wood pellets are burned in the fire pot to provide heat and wood smoke. 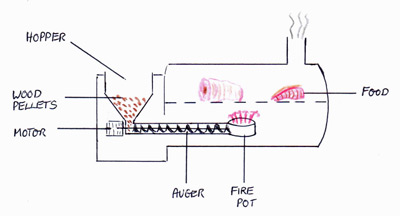 Not shown in the diagram above is the baffle plate sited between the fire pot and the food. This baffle plate protects the food from burning over direct heat and channels the hot airflow around the sides of the food chamber to create an even heat distribution throughout the chamber.

In essence it's this baffle plate that defines the Traeger Timberline 850 as a smoker / oven rather than a grill. That doesn't however mean that you can't sear a steak, it just means that you need an to sear in a cast iron griddle pan - more on this point later.

Note: Traeger recommend that you use their own brand of hardwood flavoured pellets as you'd expect and this does make the Timberline 850 an expensive piece of equipment to run. There are other hardwood pellet brands on the market so do shop around although it has to be said that all these other brands are imported from the USA to the UK and until pellet barbecues become more established in the UK then this is probably the way it's going to stay.

I recently had discussions with a well respected hardwood merchant who has bought a pellet machine but setting it up to produce a consistent product at a reasonable price is proving challenging.

Do not be tempted to use wood pellets designed for a home pellet boiler, these are not the same thing and are not manufactured to a food grade standard.

So, the Timberline 850 isn't really a grill and it's expensive to run so why would you buy one? The simple answer to that is because pellet barbecues are really easy to use, they will run for hours without the need for tending a fire and they deliver consistent results. That isn't everyone's ideas of what food smoking is all about but for those that want super convenient outdoor cooking then a pellet barbecue is worth considering.

Build Quality and Set Up

The Traeger Timberline 850 looks robust and it is. Gone are the floppy lids of previous models as this unit boasts a double skin which makes for better heat retention - something that we treasure in our cooler British maritime climate. The extra insulation also makes it marginally better on fuel economy compared to previous models.

The whole unit is heavy, at approximately 90Kg it'll definitely need two people to stand it on its cart when you first take it out of the packaging. We found the best way to set up was to lay the grill on it's side, attach the chassis and then set it upright. 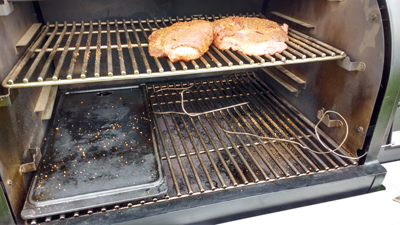 Steaks are cooked on the searing plate (bottom left)

The grill grate internals are good quality stainless steel with 3 tiers making for a good capacity of cooking space but that unfortunately is where the stainless ends. Without question a stainless steel grill looks better and will last better but at the end of the day it costs more too. Conversely, at £1,849.00 the Traeger Timberline 850 isn't cheap, it's a lot of money for something that will eventually rust and for a little more money I could be tempted toward a Leif Grillson.

If you're considering buying a Traeger Timberline 850 because you want something simple that will heat up, cook your food and keep your food warm until you're ready to eat, all at the flick of a switch (and monitor from the comfort of your armchair), well you won't be disappointed. This baby has all the convenient set and forget features of a pellet barbecue by the bucket load. 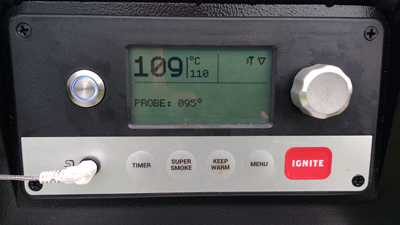 The build quality and double insulated skin definitely aids heat retention and better fuel economy too so when it comes to comparing the Traeger Timberline 850 against other pellet grills then this beast stands out too.

Traeger have caught onto to the benefits of mobile app control and their WiFire app gives monitor and adjust temperature from a distance (so long as you have wi-fi connection) so you can have all your food cooked and ready as soon as you get home from work. Moreover it allows you store favourites and share recipes, cooking times and temperatures with other people in a really easy manner.

So it ticks all the boxes on convenience but I still have a few bones of contention...

The smoky flavour wasn't great on the food that I tasted. Now overly smoked food isn't to everyone's taste and to be fair the Timberline does have a "super smoke" setting that we didn't use but I was at least expecting some BBQ flavour and for me, it wasn't there.

It's noisy. Forget about the sounds of fat dripping onto coals sizzle. The Traeger sounds like someone continuously clearing their throat, not my cup of tea.

As soon as the lid is opened, heat dissipates quickly. Temperature recovery isn't bad, with the thermostat showing a recovery of approximately 1°C per second.

The baffle plate is supposed to spread heat evenly throughout the grill... it doesn't. I found that there are still some hot spots and cold spots but this isn't the end of the world, just something to learn and then use to your advantage when cooking a variety of items.

More of a concern was the maximum temperature capability of 260°C (500°F) coupled with the fact that it's convection which takes away some of the versatility especially when thinking steaks or pizza. 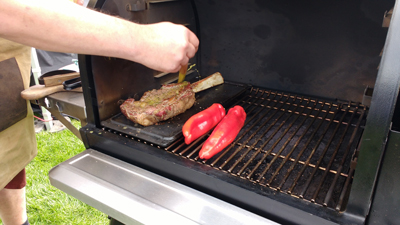 No grill marks for cooking steak on the Traeger Timberline

The Tomahawk steak above was reverse seared on a hotplate and whilst it was OK it still lacked smoky flavour and the crisp caramelisation that you only get by searing over super hot grill bars.

I love the (optional) magnetic bamboo chopping board which helps keep grill tools from falling to the floor but the same could have been achieved by simply providing a bigger shelf in the first place. For doing any serious cooking you will definitely need a separate table. 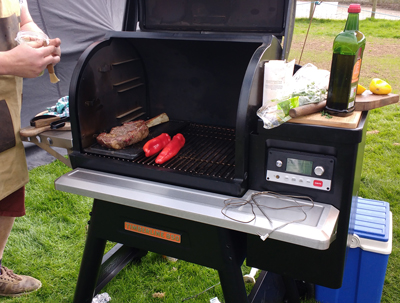 And finally, there's no "clean" program (because it doesn't reach a high enough temperature) so it's back the old wire brush, warm soapy water and a good dose of elbow grease.

Brand Back Up And Accessories

2017 has seen Traeger re-launch in the UK and they've done a good job at signing up retailers to give themselves a reasonable geographic spread. Most retailers are independent too (so they know what they are talking about) and that's got to be a good sign. You can find your local Traeger UK retailer using the map and post code search on the Traeger UK Distributor's website.

The range of branded accessories accompanying the Traeger Timberline 850 is reasonable so I think it's fair to say that Traeger are here to stay. What we need to see now is whether the UK market is going to take to the electric pellet barbecue as an accepted method of outdoor cooking.

Let's be clear, this is an excellent grill, it comes with improved build quality, good internal space and the phone app delivers up to date technology but with a £1,849 price tag it surely should. Dependent on your budget, there are other options that must be considered:

The Timberline still can't properly sear a steak with direct heat, can't bake a pizza and doesn't self clean up. If you're prepared to spend nearly £2K on a new wood pellet grill then £2,399 will buy you a Leif Grillson that will sear a steak (with fab grill marks), consistently bake crisp pizza after crisp pizza and clean itself at the end of the cookout.

On the other hand you can get phone app technology in the GMG Daniel Boone for £749, a whopping £1,100 less. Admittedly not the same build quality but a good sized grill that makes a lot less noise.