Eastern North Carolina vinegar BBQ sauce recipes aren't hard to come by and there certainly isn't one definitive recipe but the principle is straight forward. It's all about vinegar and heat. 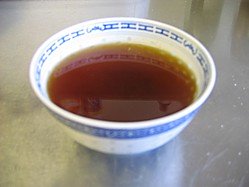 Take a look at the ingredients and you'll be thinking that the sauce looks a little thin and that's because it's more of a baste (or mop) than a sauce. In other words, you can apply it to the meat before, during and after the cooking.

The acidity of vinegar bbq sauce perfectly balances those meats with a high fat content and that makes it ideal for pulled pork, ribs or indeed the whole hog. And that also means there's no need for a rub, just work with the sauce.

I have to say that I find this sauce too harsh as a finishing sauce so when it comes to serving I still like to use one of my regular homemade barbecue sauce recipes or indeed the tomato based Western South Carolina BBQ Sauce but as a foundation there's something about acid and heat that kicks!

I've created three recipes for you:-

This one is my favorite and you can make it in a matter of seconds although once made, it's better to rest for 12 hours to let all the flavours mingle.

It's actually as simple as throwing all the ingredients into a jar with a tight fitting lid and shaking well. If you want to speed up the process of dissolving the solutes, give the mix a short blast in the microwave (30 seconds, no more) with the lid off.

When mixed, leave it in the refrigerator to allow the flavours to mingle and shake if ever you’re passing.

Because it’s a vinegar based sauce it will keep in the refrigerator safely for a month or two.

Variations on a theme, this vinegar BBQ sauce still contains the requisite vinegar and chilli but you'll find this recipe sweeter and the addition of some Worcestershire sauce gives it an extra flavour dimension.

Worcestershire sauce contains both fish (anchovies) and gluten by virtue of vinegar brewed from barley.

Throw all the ingredients into a saucepan, warm over a gentle heat and stir until all the sugar has melted.

You will find that as you warm it up, the vinegar adds a pungent note into the air, don't worry, this is normal and as the sauce warms through this pungent smell will die down.

It will only take a matter of minutes to dissolve the sugar, now cool it, give it 12 hours if you can wait that long.

The addition of soy in this one gives it something of a teryaki feel.

Soy sauce contains both soya and gluten. If you are coeliac or gluten intolerant you can directly substitute tamari for soy sauce in this recipe.

Throw all the ingredients into a saucepan, warm over a gentle heat and stir until all the sugar has melted. Note how sweet this one is but if you’ve put plenty of chili flakes in then use it sparingly!

Brush it onto your meat during the cookout and savor the flavor.