The Primo kamado oval ceramic BBQ grill has lost it's way value wise in recent years but will the 2019 season catapult it back to the top of the pile?

Maybe not the top of the pile but it's still a pretty damn good piece of kit. 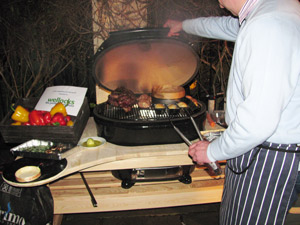 ★★★★☆ - The Primo Kamado ceramic BBQ grill is regarded as one of the finest ways to cook outdoors and like all ceramic kamado barbecues it can operate as a high temperature grill or slow roasting smoker.

The Primo used to be the "crème de la crème" of the ceramic barbecue scene but thanks to strong competition and a lack of innovation I have considered it poor value for money compared with the Monolith "LeChef" and Kamado Joe "Big Joe" in recent years.

The fundamentals of a ceramic BBQ grill is that when grilling, it heats up really quickly so you can be cooking on it 15 minutes after lighting it and you can hit sufficiently high temperatures for cooking pizza or use it like a tandoor.

With the introduction of a heat deflector stone between the fire and the cooking grate you can then cook indirectly and roast like in a traditional oven or smoke at low temperature for long periods of time.

It’s a charcoal fuelled unit that has fine temperature control using two variable dampers, one under the firebox and one on top of the unit.

Why Buy A Primo Kamado?

I was fortunate enough to get the opportunity to try a Primo recently and compare it to the Big Green Egg & Monolith grills that I have at home. Essentially all are ceramic barbecues and therefore you'd think that they all performed similarly, and you'd be right. You'd also then assume that the differential between them was price, and again you'd be partially right with the Primo beating the Egg but there's more to it than that. 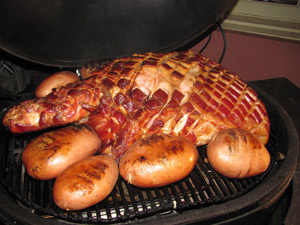 A couple of features of the Primo kamado make it stand out from the kamado crowd but is it enough? 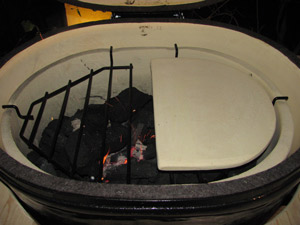 But Primo also features a cast iron firebox divider so you can have a fire (heat source) in just one side of the kamado:

...and so now does Monolith. To be fair, the Monolith solution isn't cast iron, it has a stainless steel charcoal basket with divider but it works just as well.

To help you understand the value of the split heat deflector stone I made a direct comparison of the Oval Primo versus Big Green Egg (Large) and whilst this article is still current (Big Green Egg still doesn't have a split heat deflector stone) it serves to highlight just how far Kamado Joe and Monolith and stolen a march versus what might be regarded as the two old hacks of the kamado business.

So what else is there to commend the Primo kamado? Well the cart is well built and has stainless steel side shelves which look the part and are easy to clean. Lastly it's the only kamado still to be made in a 1st world country (USA) and if you choose to buy on this point alone then I applaud you.

Some of the above you can regard as subjective, it's my opinion based on having cooked on pretty much every ceramic barbecue brand under the sun. If an oval meats your needs for cooking large hunks of meat then go for it but there is one negative to the Primo that you just can't ignore and that's the hinge...it's so heavy! If you're looking for a muscular workout then this is it!

The 2018 Oval Primo Kamado Innovation Is The G420 Gas Grill 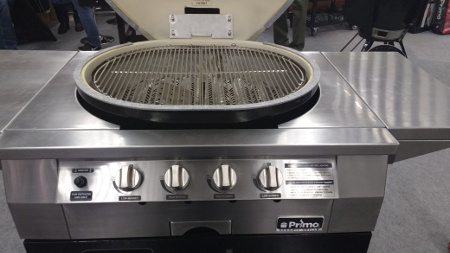 The Primo Kamado G420 oval is best thought of as a gas grill with all the benefits of a ceramic shell rather than a "more convenient than charcoal" kamado.

The beauty of any ceramic grill is that they are tremendously forgiving and temperature control is easy so if looking at it from the latter perspective then for me there's not much to write home about.

The first thing that you notice about either option is the lack of central flue which frankly I hate. The smoke vents from the around the hinge at the rear of the unit which is a perfectly "fit for purpose" technical solution and at the same is just like any other gas grill but for me there's something special about watching the smoke from my kamado plume into the air from the central daisy wheel flue.

The rear vent system means that the felt gasket doesn't seal all the way round the rear of the oval. I have a concern that the lack of ability to regulate air flow may reduce that juiciness that you can expect from a regular kamado. Let's face it, a gas grill must have an air flow otherwise the burners will snuff out but what level of air flow do you need and does the free flow of air dry food out quicker than a regular kamado? I haven't had chance yet to cook on one of these units so the jury's out on this point.

Build quality however is difficult to fault. The head and all it's components are made from type 304 grade stainless steel. 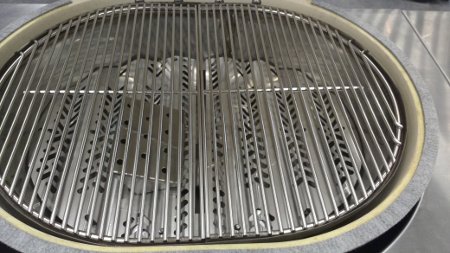 The Primo G420 grates, burners, flavour bars and smoke box are made from type 304 stainless steel.

The Primo G420 "in cart" model is supplied with LPG burner orifices fitted as standard and natural gas orifices are included for retro fitting if required. The converse offering applies for the head only option.

As you would expect there are heat deflector plates and a smoker box for adding wood chips, both of which are stainless steel and available at extra cost.

So far however, this little baby hasn't made it to the UK market.

Well not a lot really. I've focused this article predominantly on the oval but Primo also make a round grill, the same size to the Classic.

If there's anything to say for 2019 it's that the round Primo kamado has reduced in price dramatically. To be fair it looks entry level and I don't like the plastic shelves but it may give the Monolith Basic a run for its money.

I used to be a fan of the oval design because it gave greater flexibility versus the other round kamado manufacturers, it still is if you are 100% cooking large cuts of or whole animals. It if not, it's a helluva price to pay when either a Monolith and Kamado Joe can do exactly the same for less money. In addition, the oval shape now appears to be a distinct disadvantage because the lack of accessories to fit the oval restricts versatility. (Rotisserie, wok stand and cast iron plancha to name a few).

As far as the Primo kamado G420 is concerned I think that this is going to make many a gas grill enthusiast sit up and take notice because of the advantages of the insulated ceramic but PLEASE Primo, can you make it available in the UK?

Where Can You Buy A Primo Kamado?

To Buy A Primo In The UK

Alternatively you can use the store finder page on the Primo website.

Please use this Amazon link to take you through to your local store: