Comparing Primo versus Big Green Egg, here are the main differences that could influence your buying decision. After all, neither barbecue is cheap so you must get it right first time. 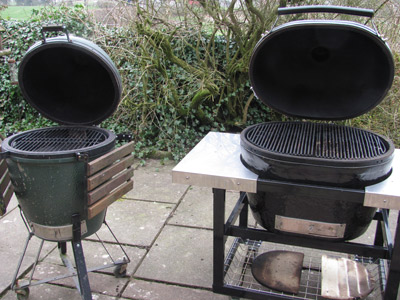 I've cooked on both a Primo Oval XL and a large Big Green Egg for some time now and I have to say that the results from both units are absolutely superb.

If you read the marketing information, both manufacturers will tell you all about the benefits of cooking on a kamado ceramic barbecue compared to other grills (and a lot of this stacks up) but when it comes to comparing between these two leading manufacturers of kamados, who comes out on top?

The construction and working principle of both units is exactly the same, both will achieve the same high temperatures useful for bread and pizza, both will do low and slow (with the insertion of the optional ceramic deflector plate), the quality of the cooking is the same. 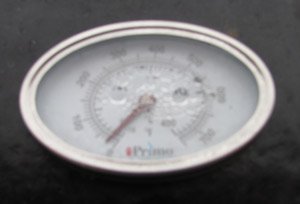 Both have equally accurate temperature gauges built into the lid that get obscured with condensation and both are equally economical on charcoal so how do you split them?

Color aside, (one green, the other black) the only real difference when comparing Primo versus Big Green Egg is in the shape and this then leads on to other features that significantly enhance the versatility of the Primo Oval XL over the Big Green Egg.

The Primo Oval XL is just so much larger in cooking area and this makes it that much more flexible when it comes to cooking a big piece of meat (or a whole suckling pig for example).

The oval design is effectively split into two D shaped halves. The cooking grates are D shaped, so are the ceramic deflector plates and there's a metal divider that fixes in the middle of the fire box. 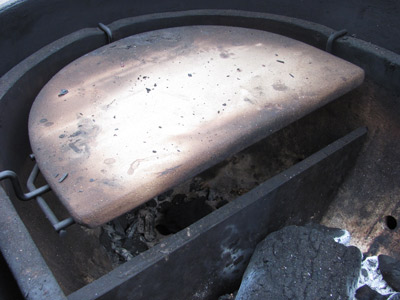 And on the subject of kabobs, the oval design really helps when grilling kabobs alone because you can fire up one side to the grill the meat whilst the kabob handles are over the other side keeping (relatively) cool. If doing kabobs on the Big Green Egg you really have to use bamboo skewers and turn using tongs.

This isn't the case with the Big Green Egg, if you wanted to replenish the coals you need to take out your food, the cooking grate and then the ceramic deflector plate (Big Green Egg refer to this as the “plate setter”) before gaining access to the firebox but even on a really long cookout, I've never had to do it. 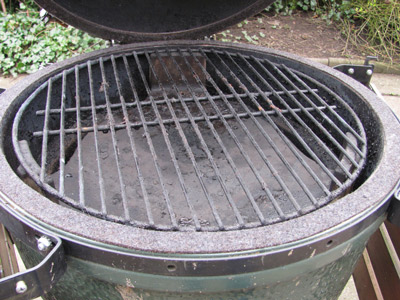 The “egg-shape” means that the firebox in the Big Green Egg sits lower and so relatively speaking you can load it up with a bit more charcoal. Couple that with its economical use of the charcoal and you can understand why I've never had a problem. This low position of the firebox does mean that when grilling, the cooking grate also sits 4 inches (10cm) below the surface line of the base and this gives you those extra inches in height in the cooking dome.

But when would you use it? I can't think of a time when grilling that vertical space has been a problem. Sure it would help if smoking a large turkey but

The Big Green Egg has an optional raised rack that you can put above to increase the cooking area for grilling but I have to say that I've never used one and if the size of cooking area was an issue then I'd just choose a Primo.

Big Green Egg do make an XL model which has a larger cooking area compared to the “large” model that I've tested but at the time of testing the XL Big Green Egg did not have the option of a ceramic heat deflector plate.....but it does now.

The Primo shape however is a “shallower” design and the ash gathering area in the bottom is shallower too. This means that clearing out the ash is vital after every cookout whereas you can get away with cleaning the Egg every 2 or 3 cookouts. If you allow ash to gather you'll block the air draft to the fire box and so restrict the temperature range that you can achieve, maybe no big deal when cooking low and slow but if you want high temperature to cook steaks then this is an important point.

The Big Green Egg has a secondary perforated slider on the bottom firebox vent to prevent hot ash spewing out during the cookout – a nice safety feature. 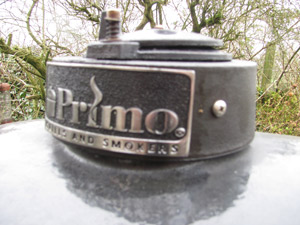 Returning to the Primo versus Big Green Egg debate - the daisy wheel draft vent on the top of the Primo is screwed into position so that when you lift the lid, there's no chance that it will fall off and because of the mounting position you shouldn't loose the draft aperture. The daisy wheel falling off has never happened to me and if you sit your daisy wheel on your egg with the hinge facing the front then you too will keep the draft aperture constant when you open the lid so I don't see the point of screwing it on. In addition, the Big Green Egg comes with a separate ceramic cover lid that I find useful because: 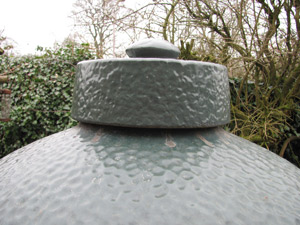 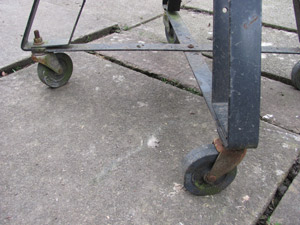 The Big Green Egg was supplied with an optional “nest” for it to sit in. For me it makes the Egg a perfect height for cooking, the fold down tables either side work well for having a board with raw food on one side and cooked on the other but it leaves me nowhere for salt, pepper or condiments, let alone my glass of wine.

Having a nest also makes the barbecue easier to move around however I would have preferred more robust casters with a wheel lock. I also find it strange that the nest was not made with three legs rather than four, that way it would have b stable on all terrain and not wobble on an uneven patio slab. 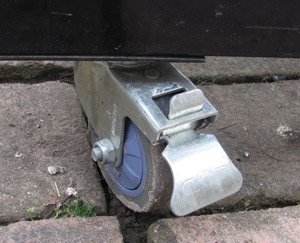 The Primo Oval XL sits in a metallic table with much more robust casters (two of which have a locking brake) and on the face it, it looks the part yet I still have the similar complaints in that the side areas are just not sufficiently big. In fact the Oval shape actually gets in the way here because this means that each side area has a narrow point in the middle making the positioning of a board of food that much more precarious.

Finally just a minor point, the lid handle on the Big Green Egg is a bolted on piece of wood whereas the Primo handle is a robust metal bar. After a few years sitting out in all weather I'm not so sure how well a wooden handle is going to look or perform.

Money no object, I'd take the Primo because of it's better flexibility and have a table custom built to suit my needs. If size isn't such a big deal then maybe it is down to the color!

For more information on each product and where to buy, use these links:

Both the Primo and the Big Green Egg come with a variety of options regarding nests, holding tables etc. so the points that I raise concerning these issues should be regarded as general points based on the equipment that I was able to test rather than specific to one barbecue or the other.

They both also have other sized models in their ranges (Primo also make a conventional round kamado) so this Primo versus Big Green Egg review must be treated as my reflections on the two models available for me to test.

Since writing this article two new brands have come on the market that give most of the flexibility of the Primo at a significantly lower cost yet they still have the service back up and extensive range of accessories.

If I were buying a kamado today then it would be a straight choice between one of these two because both the Primo and Big Green Egg would be ruled out on the grounds of cost.

Return to Recipes Home from Primo Versus Big Green Egg