How To Grill Chicken

Of course it depends in the cut to find the best way how to grill chicken but if we’re talking about a whole chicken then for me there’s one way that stands out from the crowd and that is to spatchcock it. 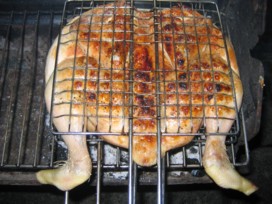 Once you know how to spatchcock chicken it makes grilling a whole chicken a really easy process. Don't ask me why but for some reason cooking the bird whole just adds so much more to grilled chicken.

The beauty of cooking this way (as opposed to cooking barbecue chicken rotisserie style) is that the inner cavity of the bird gets the same amount of cooking as the outside and this has two effects:-

In addition, because the chicken is "flat" the thickness of the meat is more uiniform so the cooking time is slightly more flexible.

Think about why you barbecue duck breast skin side down for the majority of the time, it's so that fat acts as a protective layer from the intensity of the direct heat. Your meat cooks gently and doesn't dry out.

The spatchcock grilled chicken relies on the same principle but rather than fat, it's the skeleton (not the skin side) that acts as a protective shield so you can afford to cook it more on this side and then just turn it over to crisp up the skin.

After that there’s only one other rule that I follow and that is to ensure that you season well with salt and pepper (sprinkle some olive oil on first so that the grains have something to stick to) because this just helps the skin to crisp up nicely.

When is it ready? Generally after about 25 minutes on each side but prick it and if the juice runs clear, it is done. If using a BBQ thermometer then look for

Use this link for more information about safe internal meat temperatures.

Finally, give it some good heat on the skin to make it crispy!

One last point about how to grill chicken this way, you don't have to be over fussy about the presentation. Either just rip a leg or wing off or do as I do and quarter the bird, three cuts and you're all carved - the perfect solution for four diners!

Don't just reserve this grilling method for chicken, it works fine for other similar sized birds too.

Return to Home Page from How To Grill Chicken