Every year I travel with my portable grill to the Le Mans 24 Hours endurance race or 24 Heures Du Mans as they call it in France and I always try to think of some new BBQ ideas for the menu. It’s a mecca for all sports car race fans in Europe on the same scale and prestige as Daytona in Florida (better really). Thousands of foreign race fans make the trip and the BBQ grill is the prevailing method of cooking so for all you BBQ fans making the trip here are my ideas for a tasty 24 hour cookout.

The first rule is if you’re planning on the full English then bring your bacon vacuum packed from “Blighty”. The French love their food and there’s some great treats in store that I’ll run through below but don’t expect to find bacon as we know it in the Supermarkets. 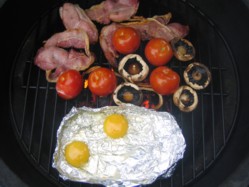 Sausages on the grill are great and one of the things that the French do well in my opinion. They don't put as much cereal is so expect your sausage to be a little more meaty than maybe what you're used to. Go for a basic chipolata at breakfast.

Frying eggs on a portable grill is a challenge. Try making circular bowls out of foil, pour in a little oil and crack the egg.

With the race starting at 15.00 now, you’re gonna have to get a wiggle on! Try Merguez or Saucisse de Toulouse and just make a hot dog out of the French bread baguette. 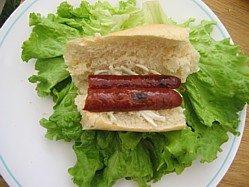 Merguez is a spicy sausage usually made from lamb or poultry (volaille) with harissa being the ingredient that gives the kick.

For the healthy amongst you might want to add a lettuce leaf but my favourite is from the deli counter in the Supermarket. Look out for celeri remoulade (shredded celeriac in a mustard mayonnaise dressing), spoon some of this into your baguette to make your hot dog complete. Tasty – but messy! 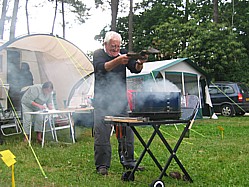 As the dusk settles over La Sarthe and the drivers dig in for the long night it’s time to fire up the portable grill once again for the evening BBQ.

While the charcoal is settling, (or in Stuart's case opposite - while you're fanning the flames!) flame grill red peppers and make a salad with olive oil and balsamic vinegar. Then when you’re ready to cook, try the following:-

Stuffed Mushrooms – large open cup mushrooms, remove the stalks and chop them up. Throw the stalks back into the open cup and fill the mushroom with rillettes and grill gently until the mushroom is soft. Serve with a salad leaf garnish.

Look out for rillettes in the cooked meat aisle, it comes in tubs and is supremely un-healthy but so tasty.

For the main try a butterfly lamb shoulder . You might not want to go for the full recipe but just dust with paprika and grill. At the end of the day, facilities at the Le Mans 24 Hours are pretty primitive so keeping the recipes simple is the order of the day.

If you fancy the lamb, ask the butcher for épaule d’agneau or hunt one out in the supermarket.

To round off the evening try barbecue Camembert and garlic bread, let the cheese slowly soften in the embers and sit back and enjoy the nights entertainment. 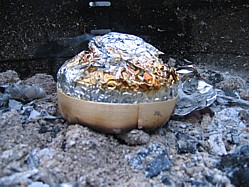 Well at the Le Mans 24 Hours it’s gotta be “33 Export” – if you want to pop by to share one, look out for my Peugeot 504 Cabriolet on Maison Blanche. Whether watching at home or at the circuit, enjoy the event!

That's the food and drink done, if you need any more information about Le Mans 24 Hours then check out my friends at Beermountain.com

Other Event Menus And Themes:-