So it might be cold where you and I are but that doesn’t mean that there aren’t folks out there looking for tasty barbecue Christmas recipe ideas. Then there’s also the likes of you and me who are such enthusiasts of the smoker and grill that we’ll fire up at any time of year. 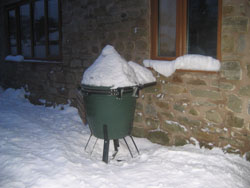 More and more I hear about friends of friend firing up their barbecues on Christmas day and whether you like outdoor cooking or not I think that it makes perfect sense.

For a start, cooking the turkey outdoors frees up so much space in the kitchen for doing all the other preparations. And then there's no mess, well at least nothing that you need worry about after the meal so you can just relax and enjoy a stress free day.

And finally your neighbours will think that you really have lost the plot!

Don’t make the mistake that I did and wait until Christmas day to open up my kamado – the lid had frozen! A combination of moisture in the felt seal after a lot of rain followed by a very sharp plunge in temperatures. It caused for a mild panic on my part but after some thought I managed to save the day and serve up a beautifully succulent turkey.

Note: - If it ever does happen to you there's two options:-

My Christmas recipe ideas for the barbecue will grow over the years as I try more things but Christmas only comes once a year so don’t expect any updates in the middle of June! Here are the recipes so far:-

More traditional than turkey but now not as popular is goose. If you're game to try something different then here's my Smoked Goose Recipe

To finish off the Christmas day celebrations I have two treats guaranteed to send you off to sleep during The Queen's Christmas message...

Mince Pie Puffs - Ready in 30 minutes and the perfect way to finish off your Xmas meal.