Grilled Pork Chop Recipes Don't Get Better Than This

Stuffed with raisins, this is one of my favorite grilled pork chop recipes and surprise surprise it comes from Spain - I just love the Spanish way of cooking! 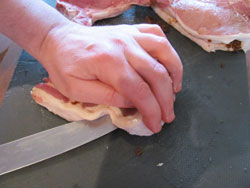 The recipe calls for brandy and with it being a Spanish recipe you've got to get some Brandy de Jerez if at all possible. This is Spanish brandy and it differs from French in that the casks used to flavor Spanish brandy come from the sherry casks (French brandy typically uses port wine casks).

Does it make a difference to the flavor? I think yes. The Spanish brandy is a touch sweeter than its more well known counterpart, it is usually cheaper and I have to say that I actually prefer it.

You have to marinade the raisins in the brandy for 30 mins (plenty of time for you to do a taste test and see if you like Spanish brandy too) and after that the recipe is pretty straight forward.

It's best to get these from your butcher because then you can explain what you are doing, not only will you get the right shape of chop, your butcher will know to make sure that the chop is thick enough to stuff.

Pour your raisins into a bowl together with the brandy and allow the flavors to mingle for half an hour or so. Now add the fresh marjoram, seasoning and pulse in a food processor so that you've got a crude pulp, this is the stuffing.

Using a sharp knife, make an incision in the side of the pork chop from the opposite end to the bone. Try to keep the incision relatively small (otherwise your stuffing will fall out) and move the tip of the knife around inside the chop to create as large a cavity as you can taking care not to puncture the surface. You can also use finger in the cavity to wiggle it around to create more space.

The larger you can make the cavity and the smaller you can keep the opening all the better. Now spoon in some of the raisin mix, season the chops with a sprinkling of salt and pepper and then you're ready to grill.

Depending on the thickness of your chops I work on 7-10 minutes per side over medium hot coals and that's it, job done. You can afford to be a little over on cooking this recipe because there's so much moisture in the stuffing but still be careful not to let the chops dry out.

Pork must be cooked through and the best way to ensure it is done is to use an instant read temperature probe. Look for a temperature of 75°C (170°F) in the thickest part of the meat and take care to ensure that the tip of your probe is not in the stuffing because this could give you a false reading. To be sure, take a sample reading from different parts of the chop.

When done, remove the chops from the heat and allow them to rest for 5 minutes before tucking in. 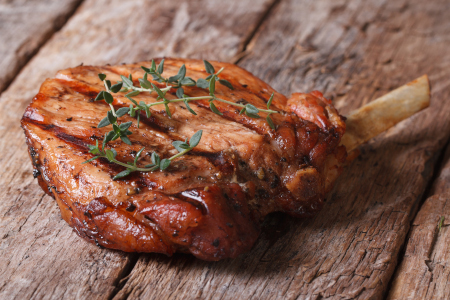