I've deliberately christened this Christmas barbeque turkey recipe because it's cooked indirectly on my kamado BUT I haven't added any smoke flavor. 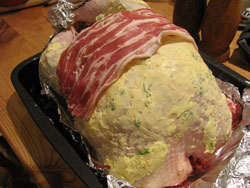 The ingredients that I've used to add succulence and flavor would be overpowered by more smoke so I've left it as is but despite that, you can still tell that it's been cooked over charcoal.

This recipe produced the most succulent turkey that I've ever tasted which is in part down to my single biggest tip for cooking smoked turkey and that's in the long resting time. In fact I was so excited by the results that I forgot to take a picture for you – how bad is that?

At least I've got a couple of pictures of the preparation and note how the butter is spread out under the skin of the breast before I layer on the streaky bacon.

Another point to note is how the bird has been stuffed with onions, garlic and lemons. The moisture in these fruit and veg will gradually effuse and steam your barbeque turkey from the inside out. 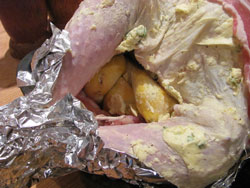 You can do the first three stages of the preparation a day in advance then all you've got to do is put your turkey in the smoker on Christmas Day. My turkey is 10lbs, ample for serving 8 to 10 people and the cooking a resting time totals 8 hours.

Ingredients to stuff the bird:-

Remove the giblets and season the inside of the cavity with salt and pepper. Now stuff the rest of the ingredients in the cavity, there's no particular order.

Ingredients for the butter:-

Use your hands to release the skin from the breast at both ends of the bird so that you will be able to stuff the flavored butter underneath it, but take care not to puncture the skin – patience is required when doing this. When you've done the breast, move onto the legs.

Now throw the ingredients into a mixing bowl and get your hands in to mix it all together. (This is the messy bit). When thoroughly mixed, take half your butter and stuff it under the skin and massage it so that the butter spreads throughout.

Drizzle some olive oil onto the skin of the turkey breast and season well. Now smear on the remainder of your butter and layer on the streaky bacon. You can now cover your turkey and refrigerate until you're ready to cook.

Place your turkey in the smoker over a water bath and cook indirectly for 4 hours at 225°F or 110°C. Check the core temperature both in the breast and close to the bone in the leg with an instant read temperature probe, you're looking for an internal temperature of 170°F or 75°C. When the time is up, transfer the bird to a carving board and rest for a further 4 hours before carving.

During this time you've ample time to make the gravy. I use the veg from inside the bird together with the bacon from the breast and fry up with the giblets until the giblets are browned. Then I make a stock by adding water and boiling for an hour. The last stage is to put the contents of the stock pan through a sieve to produce a clear liquor.

Serve the gravy piping hot on hot plates and that way no one will be any the wiser that your Christmas barbeque turkey wasn't as hot as everything else on the plate....but it will be the most succulent ever tasted.