How To Grill Shrimps

Learning how to grill shrimps is really easy because the cooking process is color coded. Having said that you still have to be attentive because there's nothing worse than overcooked seafood that's dry and rubbery.

In simple terms, the shrimp is grey and translucent when uncooked and has a pink shell with white opaque flesh when cooked. See the transition from left to right in this picture:- 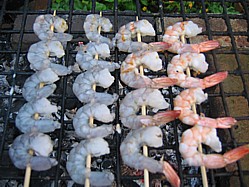 Broadly speaking you can work on about 5 minutes over a high heat turning once at half time but learning how to grill shrimps is about the preparation too.

Shrimp Or Prawn...is there a difference?

The bottom line for UK, Australia and Commonwealth countries is that a shrimp is small (such as the brown shrimp) and probably no more than 1 inch long and a prawn is larger. In America it's a shrimp, end of story.

Note:- I thought Australians referred to the larger varieties as shrimp after seeing Paul Hogan say "I'll put another shrimp on the barbie for you" in a Fosters lager commercial. What I didn't realise was that the terminology had been changed to make it more understandable in the American market.

So back to grilling, wherever you are in the world it's the larger ones we're talking about.

What size is best?

Large shrimp or jumbo prawns? This reference point whether on a bag or display is subjective, confusing and no real guide to the size on offer. Fishmongers grade shrimp by the number that you get to the pound weight (lb) so for example a shrimp graded 21/25 means that you get between 21 and 25 in 1lb.

Note:- Whist in the UK we use the metric Kg as the unit of measure for retail sales, the sizing of prawns is still done by the pound (lb).

I tend to think of anything between 15 and 25 as large and ideal for grilling.

The quality of frozen shrimps these days means that there's very little difference between the two but fresh is best provided you live by the sea and the catch is local.

After that, look for cold water shrimp.

If you see fresh raw shrimp / prawns on your fishmonger's slab labelled "Madagascan" these are African warm water shrimp and will certainly have been previously frozen. That said they're not bad at all, make sure that the head is still firmly attached to the tail, the tail should also be springy and avoid any that have any orange colour to the head.

When it comes to buying frozen, identify on the pack from where they have been sourced. There continues to be a lot of controversy around warm water prawns from the Far East (Vietnam and Thailand in particular) following poor levels of hygiene and extensive use of chemical and antibiotics in the farming process. In short, the farming is considered by many to be unethical and not sustainable.

So my general rule of thumb is fresh is best but if you don't live by the sea then frozen cold water shrimp are the next best thing.

Just make sure that frozen shrimps have fully defrosted and all the excess water has been removed prior to cooking.

This is especially important when grilling on a searing plate because if there is excess water sloshing around then the shrimps will boil rather than sear and this will result in a floury texture to the body of the shrimp.

You can buy shrimps whole in their shell with the head on, tails still in their shell or ready shelled, butterflied and de-veined, it's your choice. There is no other way to prepare a shrimp other than by hand so the cost of your shrimp is directly related to how ready prepared your shrimp comes. So if you want to save money then buy them as they would come out of the water and do the preparation yourself.

There's an awful lot of flavour in the shell and in many Mediterranean countries shrimp will generally be served head and shell on with the vein still in. Full of flavour but not easy to eat. I prefer to peel and de-vein prior to grilling, the flavour reduction to me is hardly noticeable and the texture is so much better. 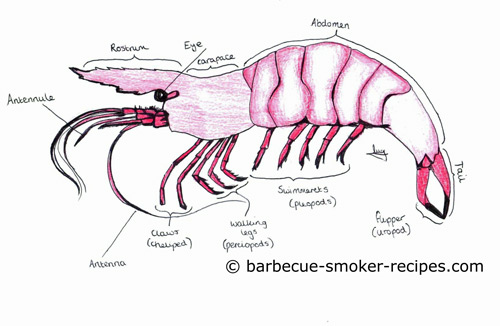 Next is to peel the tail and there isn't really a standard process to peel a raw shrimp.You'll notice that the shell is in segments:

Note:- Some chefs like to leave the fin on the tail. It looks colourful and it gives you something to hang onto as you eat your shrimp. If you want to prepare the tails this way there is no other option, you just have to keep peeling all the shell segments away.

How To De-Vein A Shrimp

The dark vein that runs down the back of the shrimp is the alimentary tract (its gut). It's not essential to remove it especially in smaller shrimp and certainly it's impossible if you've cooked the shrimps with the shell on but at least by removing it you can ensure that you're eating the shrimp and not what the shrimp had for its last supper. It can be gritty in texture.

To de-vein the peeled shrimp:-

There are a couple of other ways to do it and I found this video really useful.

How to Grill Shrimps - Use A Skewer

When you're starting out, don't over complicate things, just follow the advice above, grill your shrimps over hot coals until they turn pink. Add a bit of salt and lemon juice before serving and that's it.

Understanding how to grill shrimps is less about cooking time and more about practicality. Assuming you have a large (ish) shrimp and you've peeled it then the bamboo skewer is king, but don't use one like I did above, use two. That way they are easy to turn.

When you've mastered how to grill shrimps, try one of these recipes:-

The Barbecue Shrimp Recipe Has Four Drizzles To Try

How To Grill Shrimps In 15 Minutes Start to Finish

Return to Recipes Home from How To Grill Shrimps